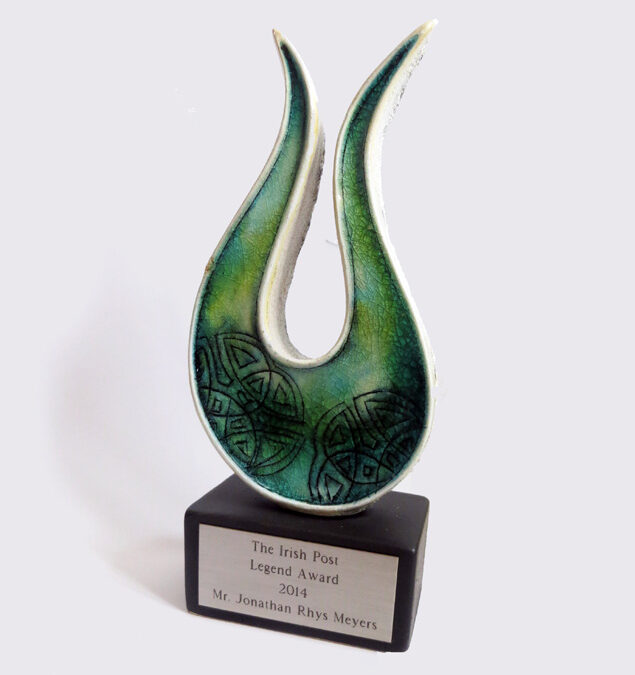 STARS of film, sport and business joined the Irish in Britain for a stellar night at this year’s Irish Post Awards, which took place in London.

This is our second year working on these awards in collaboration with Dublin ceramic artist Michele Hannan.

The finish on the trophy was an unusual volcanic style glaze, along with a black base and silver engraved plate. The front section incorporates The Irish Posts Celtic design, which artist Michele Hannan incorporated both simply & elegantly. Firstly hand drawn onto the surface, it was then layered with rich luster’s and finally glass, to give it that special sparkle.This bespoke trophy has a very contemporary Irish feel and it made a lasting impression on the night of the event.

Almost 700 guests gathered at the London Hilton on Park Lane for the exclusive ceremony hosted by broadcaster Eamonn Holmes.

Also being honoured on the night with an award for Outstanding Contribution to Business in Britain was Sean Mulryan, Chairman and Group Managing Director of Ballymore – an international property investment and development company.

Designer Louise Kennedy, who celebrated 30 years in business in 2013, picked up a special gong for Company of the Year.

A special Community Award was also given out on the night to Michael Forde, Chairman of the Irish World Heritage Centre in Manchester.